Halo, a perfect example of how far the competitive multiplayer shooter has come.  Its had its ups and downs, but no matter what happens with the series we still want more. Halo 5: Guardians does so much right with keeping with the times, but it still has its share of problems. New Gameplay mechanics, strong dedicated servers, and beautiful graphics make this the must own exclusive on the Xbox One,  but will it hold up with the competition?

Much like Halo 2, you play from 2 separate views. Your either Spartan Jameson Locke, or as you can already guess Spartan 117 Master Chief. 75% of the short 5 hour campaign is spent with Spartan Locke, while can be fun at times, is a bit lack in “Hero” material. The best thing about the Halo series is its Cover boy. Master Chief is someone who stands for something he believes in. A hero we can count on. Yet, Spartan Locke on the other hand is just another soldier following orders.  Its hard to be thrown into the Halo universe with such a mediocre character. Not that there couldn’t have been potential with it, but Locke just seems too “mission” focused to really show us his true self. His mission is simply, FIND AND RETRIEVE  Master Chief. Master chiefs mission on the other hand, without spoiling any twists, finds him in search of a familiar friend whos up to some suspicious activity. There’s tons of action around every twist and turn throughout the many different levels, which is good due to its lack of engaging dialogue. In the end, once you find Chief and come to the inevitable cliff hanger you’re left with nothing but more questions. 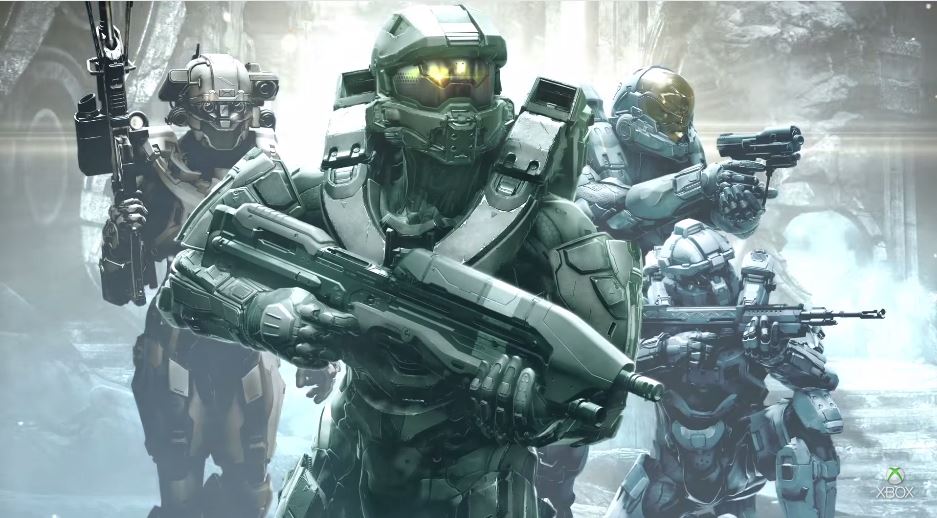 I applaud 343 in every way I possibly can for finally getting with the times of more modern shooter play styles, while still making it feel incredibly much like Halo. The movement, the aiming (now with iron sights), and the shooting feel so rich and smooth you ask yourself whether or not you’ll be able to play previous titles again. One of the most noticeable additions is the Spartan Charge, kind of an shoulder rush attack, and the ground pound attack. The campaign uses both of these in the most mediocre way possible, like breaking through grates, walls, or floors, but where its most satisfying is using them to rack up some sweet kills in the multiplayer. Other noticeable changes are how each weapon actually handles and plays so unique, it makes it hard sometimes to decide what to grab off the battlefield. Yes, there are some weapons that 343 may eventually throw an update out for due to them being overpowered (magnum, carbine, and scattershot), but until then they will be the players preference. With so much, so right in gameplay, it really makes Halo 5: Guardians the best of the best on Xbox One.

The best thing about bringing beloved IPs to the Next Generation of consoles is seeing how good it will look, and Halo 5: Guardians delivers.  The visuals in this game is insane. Throughout the campaign your are consistently shown outstanding back drops and detailed interiors that you never would have expected in a Halo game. Despite not being a true 1080p game (up scaled from 720p), this game is gorgeous, and the consistent 60fps make it even better and noticeably the best looking game money can buy on the Xbox One. 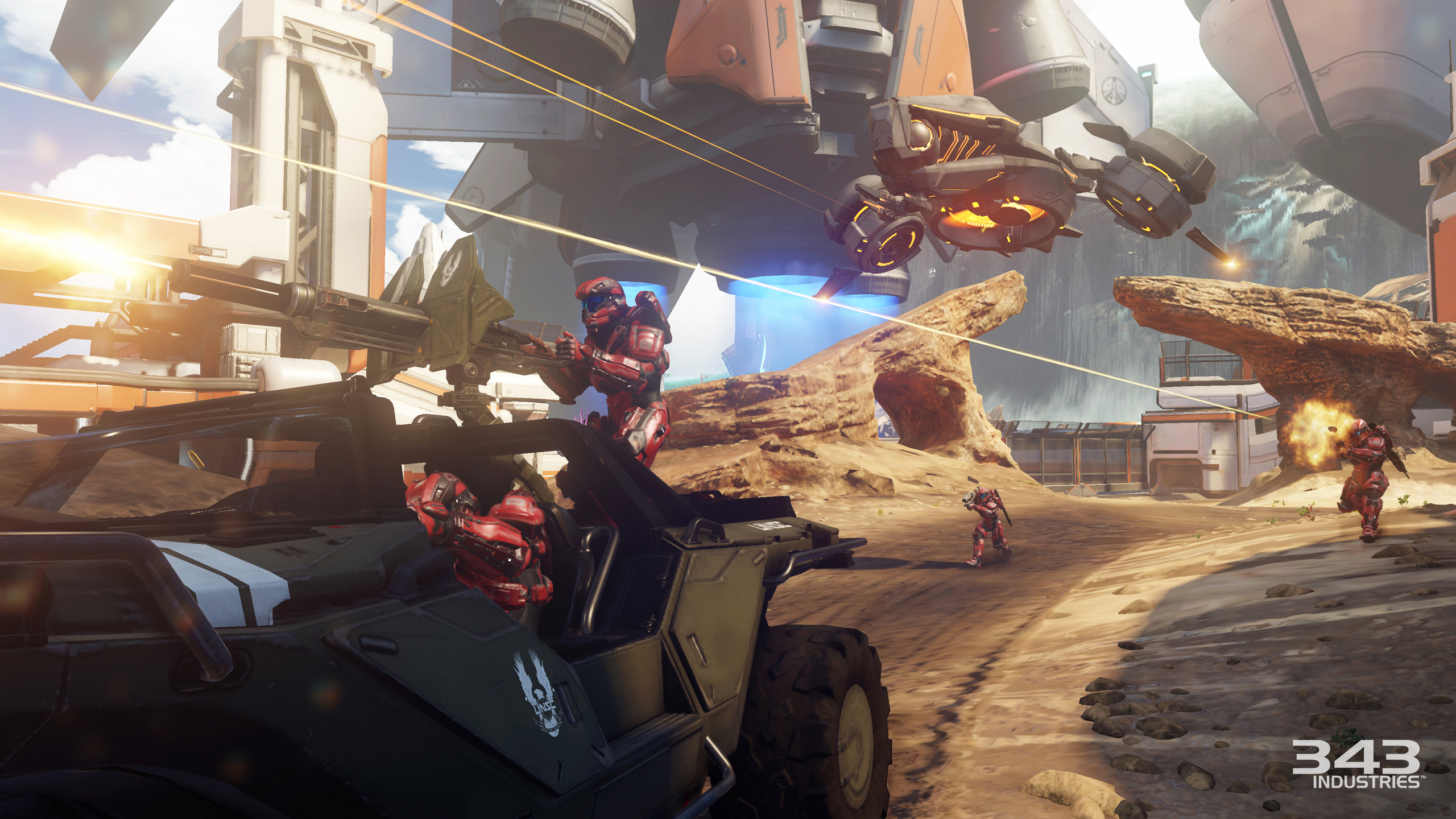 For the first time since 2008, Halo is back on top as the best multiplayer shooter out there. With all the new gameplay mechanics, Halo multiplayer has gotten a much needed resurrection after the failures of Halo 4. Pre game loadouts are gone. Character class systems are gone. Its back to the classic setup where you learn the map to find weapons, and everyone starts off on a level playing field. The multiplayer is divided into 2 different sections: The arena, and Warzone.

The Arena section consists of classic match types such as Slayer, Free For All, capture the flag, and Swat. While introducing 2 new match types called Strongholds and Breakout. Strongholds is a halo twist on the classic Hardpoint and Domination modes from Call of Duty and battlefield, where as Breakout is the new original mode. In Breakout, you and 3 buddies tackle on 4 opposing members in elimination style play. There is also a flag involved. To score you either eliminate all 4 team members or grab the flag and take it to the opposing teuams base, in which you need 5 points to win the match. Breakout is the most exciting and yet the most stressful arena mode available and I absolutely love it. Breakout takes a lot of the core multiplayer techniques and puts the players abilities to the test, and will also most likely be the new format for esports leagues.

The Warzone section has 2 types of matches. One involes capturing bases and earning time tickets in accordance to the amount of bases you control (a lot like Conquest in Battlefield), and if you control all three points you disable enemy base defenses in which you would then infiltrate to destroy the bases core. The other match type has no bases to control just each teams bases core to destroy. To win the match on either match type, you either need to reach a ticket limit of 1000 or destroy the enemy core. There are alternative ways to earn tickets as well through eliminating AI controlled bosses that drop in. Basic bosses earn you 25 tickets where as legendary bosses earn you 150 tickets.

The other major change in multiplayer you will immediately notice are the earning of Requisition points. Requisition points that you earn are used to spend on Requisition packs. Now Requisition packs can also be obtained through micro transactions, but from my already logged 68 hours into the multiplayer I have yet to spend a single dollar on packs, but the availability is there. Now, I am not a fan of micro-transactions, but in this case I’m more open to it due to the fact that because they are present, ALL multiplayer DLC maps will be free. So, what do these Requisition packs do? Well, they unlock Req. cards in which you use in Warzone. Aside from the basic Magnum, battle rifle, assault rifle, and SMG, you will need these Req cards to unlock other weapons to use in Warzone. Warzone is very exciting and fun once you get the hang of it, but once you start running low on power weapon and power vehicle cards you will need to go back to arena to earn more Req. points, or stick it out in Warzone with the basics.

Overall the multiplayer is the heart of Halo 5: Guardians, and with the vast community and different modes it has to offer, it is already the best Halo multiplayer to ever come out.

As you would expect from a big budget AAA game from Microsoft, the sound quality is top notch. From the different sounds that each gun makes, to the footsteps behind you. Halo has always had great music and effects, and 343 held nothing back Halo 5: Guardians.

Halo 5: Guardians may not have the most fluid campaign in the series, but where it lacks in story it most assuredly makes up in its competitive multiplayer. It is the best looking and sounding game in the series and after a total 78 hours of play time between the multiplayer and single player I still want more. Halo 5 far surpasses all the expectations I had for it, which wasn’t that high to begin with due to the rocky gameplay of Halo 4. This is a must buy title not only for Halo fans, but for die hard competitive shooter fans.

The Call of the Wild Review

This website uses cookies to improve your experience. We'll assume you're ok with this, but you can opt-out if you wish. Accept Read More